The conventional wisdom in the startup community these days is that to create a successful startup, you need to move at breakneck speed in everything you do. And, to facilitate this, you should consume as much money as you can get your hands on along the way to make sure you’re removing all obstacles from getting to market. The perception is that if you move too slowly at the beginning, you’ll miss the market and, even worse, you won’t get funding. But is this correct? In The Startup Playbook, we discuss how you can plan better early on, increase your chances of success AND raise less money along the way. Here’s how to do it.

While we completely support the idea that getting a great product to market as quickly as possible is a cornerstone of startup success, we just don’t buy that frenetic speed is the best way to do it. It’s not what has worked for us, nor for any of the successful startups we’ve invested in or advised.

No one wins when a startup optimizes all its success for the short term. Yet, uniformly applying speed to everything you do does just that. As a startup, you need to deliver more than just a first product to a handful of customers, you need to continually deliver to a large number of customers over a long period of time to be successful. We refer to this as scaling. You can’t scale if you’re always firefighting and scrambling. Scaling requires at least some structure and methodology. Especially early on.

We believe that starting slower and more methodically, especially in the early stages as you’re vetting your idea and the target market, is the key to shifting the odds of creating a successful startup in your favor. Here’s why:

Not convinced? We don’t blame you. Most of the things you’ve heard and read from so-called startup experts say that speed is the singularly most important factor in building a successful startup. The general idea is that you should do whatever it takes to get a minimal product into customers’ hands quickly, then rapidly iterate through changes to the product to meet those customers’ needs, fix problems and add value. Lather. Rinse. Repeat.

With this methodology, you certainly get a product into your initial customer’s hands fast, but you wind up spending ages getting it right once you start collecting feedback. You won’t be able to start expanding your customer base past the initial few beta users until you’ve hacked through all the product issues you’ve created in your rush to deliver.

And, while moving at top speed through this process, you’ll be burning loads of cash. Speed requires capital just like driving your car fast consumes more gas. When you run out of money while you’re spinning your wheels fixing problems and figuring out what your customers really want, you’ll have to go back to your investors before you’ve really proven anything. If you get money at that point, it won’t be at a great valuation.

To drive the point home further, here’s a short story that illuminates the problem. Names have been removed to protect those responsible for the trainwreck . . .

Xyz.co thought it had a great idea. As with most ideas, it was far from a product, but I digress. Early on, Xyz.co aggressively pursued customers it thought would love its idea and, ultimately, found a few to validate that the idea made sense. Several of these potential customers indicated to Xyz.co that they might even be willing to pay for a solution if, in fact, Xyz.co delivered one.

On this news, Xyz.co raised a small seed round from angels at a reasonable valuation and set off to turn their idea into a real product. They had heard that moving fast was the only way and took the largest and fastest steps possible to get to a deliverable product. Details and budget be damned. They worked hard and after many months of work and spending far too much money, they delivered their beta product to the customers who said they were interested. Most of the customers quickly ran into problems that prevented them from fully testing the product and others found the initial limited functionality kept them from getting real value from it.

Xyz.co expected this and worked hard to create rev 2 of their beta product for the customers to try. Most did, but a couple dropped out, saying they didn’t have time to continue testing an early product. This time around, there were more problems and, while there was deeper and broader testing of the product, no one felt it was ready for prime time.

Internally at Xyz.co, the developers started to get worried they were creating more bugs with every release. They were making patches on top of patches and the product was becoming a maintenance problem. Rev 3, once delivered into customer’s hands, showed that this was true and customers were no closer to paying for the product.

The founders started to get concerned and realized they had to go out and get more money. A simple bridge note from their angels wasn’t going to be enough, so they started talking to micro-cap VCs and some large funds as well. Most weren’t interested because Xyz.co had yet to prove anything, including if they could build the product, if there was a market and, if so, whether there was product-market fit. Eventually, though, a small institutional investor stepped up and put in the needed money. Unfortunately, it came with some tough terms and at the same valuation as the initial seed round. Ouch!

Xyz.co released two more beta versions until a few of the remaining beta customers paid for “production” software. As Xyz.co tried to expand their customer base, however, they learned that their beta customers were not entirely indicative of the greater market’s needs. They found that certain other features were required to attract the attention of a larger customer base. To address these needs, they got right to work, again, moving as fast as possible and consuming a lot of cash.

But, by this point the product had become a Tower of Babel of changes, layers and patches. It was simply too difficult to support and to continue to build upon. Again, the founders went out to raise more money. They planned to restart development of the product from scratch with everything they learned along the way. The new product would be better and meet the needs of more customers in a larger market. But, no one cared. At least no one with money. They couldn’t raise the capital they needed. Eventually, they shut down.

You can replace the pseudonym, Xyz.co, with the name of almost any failed startup, there are a lot to choose from. And this type of failure doesn’t always happen this early in a company’s progression. Sometimes, the company makes it through the early stages, but is continually weighed down with the product debt they created. That debt, in the form of broken product, failing to find solid product-market fit, and struggling to achieve a deep understanding of exactly who the company’s customers are is hard to shake. It often results in more rounds of investment than would otherwise be needed, lower valuations and, funny enough, slower growth. All because speed was the sole and primary driver.

But, when you’re more methodical about the vetting process, you work through the fundamental needs of your customer, the market, and developing a deep understanding of your competition so that meeting your customer’s needs is baked into the product, instead of patched together once the product is in the customer’s hands.

How is it that you can move faster in the long run by moving slower at the beginning?

The way you do it is by building a solid foundation right out of the gate. Sounds so old school, right? But it works! By using a methodical approach to vetting your idea, the market and your company, you can grease the rails to success. You do it by answering a few key questions before you squish the accelerator pedal to the floor. As it turns out, answering them early in the development of your startup won’t cost you much, either.

That’s it. Seems obvious, yet most founders don’t work to answer these questions before they build their product. They try to learn the answers along the way, if ever, in the name of speed.

To be fair, the list isn’t quite as simple as it seems. Once you get to answering any one of the questions, you may (read: will almost assuredly) find that your idea no longer applies or doesn’t hold up. When you define product-market fit, for example, you may find that some of your fundamental assumptions get thrown out the window. Or, perhaps, you find you can’t build the team as a result of the broad needs of the customer base. Or, no one is interested in funding projects for the particular market you’re targeting. These kinds of problems happen all the time. Better to find out about them early, right? Before you’ve wasted a bunch of time and money.

Just to be clear, you would have encountered these problems anyway, just later. Asking the questions early doesn’t change the problems, it just makes them apparent earlier. When you find the problems early, you can deal with them better and make adjustments in stride.

To be most effective, it’s better to think of these questions forming an iterative loop. By thinking of them this way, you get a lot more comfortable with the fact that this process helps you converge on a refined idea. The refined version of your original idea will better address known customer needs and, therefore, demonstrate real product-market fit. As a result of that, you’ll have a platform for differentiating yourself from your competition or the status quo and you’ll understand the parameters for building a successful team that can execute what needs to be done. Answer all those questions and you’ll also have a basis for investment that will more likely attract the money you’ll need to execute. 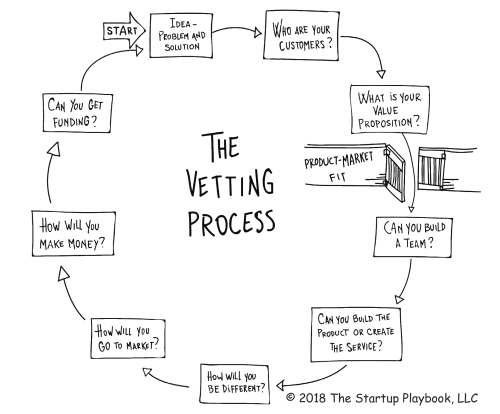 When it comes to funding your startup while you’re working on the vetting process, you won’t need much, if any, to work your way through it. Almost every question can be answered with determination and legwork. A little capital is nice, but a lot isn’t necessary. And, when you’ve looped several times and your idea is refined and all the questions have good answers, you’ll be more able to raise capital at higher valuations than if you were hacking through the answers as you struggle to build the company. Bottom line: you raise less money!

The ultimate benefit of starting slow to move faster is that you’ll develop a thorough understanding of customer needs, requirements, and preferences as a result of your deep customer engagement and analysis. So, when you finally deliver the product to your customer, it’s more likely to be better defined and in a state they’re more likely to purchase. It won’t be perfect – we’re not advocating that you spend loads of time working to deliver a complete product. But, because of the better planning, you’ll have a better platform to quickly iterate and meet their needs. More importantly, you’ll be able to scale much faster. You can find new customers, expand your market, and more quickly react to changes in needs and opportunities. You’ll be moving, well, faster.

Moving fast, as in throughput to the customer, is the goal. Isn’t the best way to get there by moving slow to start? A total no-brainer, especially when you can raise less money to fund your startup at the same time. This, and many other perspectives on building successful startups can be found in our book, The Startup Playbook. Super easy to read and chock full of startup wisdom. Written by founders for founders. Check it out.