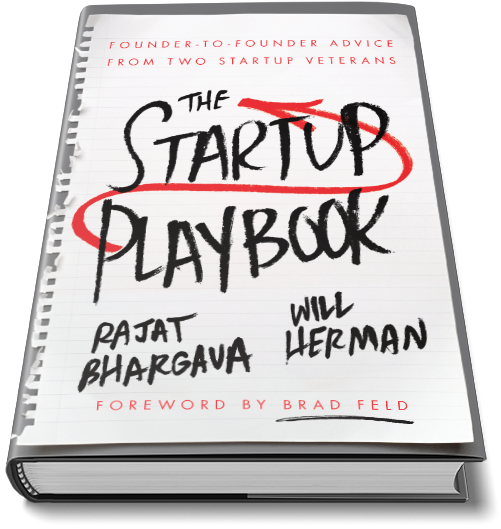 Almost four years ago, we started our two year effort to write the go-to book for first time entrepreneurs. Our reasons were pretty straightforward – we couldn’t find any books available that answered the basic questions that we hear startup founders ask all the time. Other books seemed to be written more to serve what the authors had to sell – venture capital, legal services, financial advice or just their ego – than the founders’ needs. Being founders of many companies ourselves, we wanted to write a book from the entrepreneur’s side of the table. Thus came about the creation of The Startup Playbook.

If we had known what we were getting ourselves into, we may have passed on the effort. It took way longer than we expected. We, essentially, wrote the book three times. Some of the lengthy process was because we knew nothing about writing a book; some of it was that we were perfectionists in the getting down the information we thought new founders needed; and some was taking the time to get feedback from a large number of super helpful beta readers. Also, as we talk about in the book, it’s hard to make a success out of a side gig and the book was definitely a side gig for us.

Yesterday, exactly 18 months since we introduced The Startup Playbook, we “shipped” our 10,000th copy. As it turns, out, that’s the number of copies we set out as our goal. We thought that if we could impact that many entrepreneurs, the journey would have been worth it. We priced it aggressively so that cost wasn’t a barrier – we never even planned to make money on the book – and several accelerators have used it as part of their programs. We’ve learned a lot along the way and have gotten great feedback from or readers. The book was on Amazon bestseller lists multiple times and currently has a 4.9/5.0 rating.

Along the way, we’ve learned a lot. 10,000 was our initial goal, but that’s not where things end. We still talk with new entrepreneurs about the contents of the book and offer guidance along those lines as often as possible. Book sales continue, of course, and we really enjoy the fact that so many people have gotten so much out of it.

Thanks to everyone for all the support of the book. 10,000 is a great milestone, but we have so much more to do!

Tagged under: The Startup Playbook